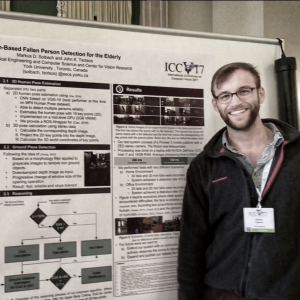 I live in Toronto, Canada and I’m a Graduate Student at York University, at the John Tsotsos  Laboratory for Active and Attentive Vision. Interested in Computer Vision, Robotics, Machine Learning, Big Data Analytics and single-board computer. In my free time I enjoy traveling and sports.

Visual Attention and its Intimate Links to Spatial Cognition

It is almost universal to regard attention as the facility that permits an agent, human or machine, to give priority processing resources to relevant stimuli while ignoring the irrelevant. The reality of how this might manifest itself throughout all the forms of perceptual and cognitive processes possessed by humans, however, is not as clear. Here we examine this reality with a broad perspective in order to highlight the myriad ways that attentional processes impact both perception and cognition.

Totally Looks Like – How Humans Compare, Compared to Machines

Perceptual judgment of image similarity by humans relies on rich internal representations ranging from low-level features to high-level concepts, scene properties and even cultural associations. However, existing methods and datasets attempting to explain perceived similarity use stimuli which arguably do not cover the full breadth of factors that affect human similarity judgments, even those geared toward this goal.

We present a Polyhedral Scene Generator system which creates a random scene based on a few user parameters, renders the scene from random view points and creates a dataset containing the renderings and corresponding annotation files. We hope that this generator will enable research on how a program could parse a scene if it had multiple viewpoints to consider.

Falls are serious and costly for elderly people. The Centers for Disease Control and Prevention of the US reports that millions of older people, 65 and older, fall each year at least once. Serious injuries such as; hip fractures, broken bones or head injury, are caused by 20% of the falls. The time it takes to respond and treat a fallen person is crucial. With this paper we present a new , non-invasive system for fallen people detection.

The virtual reconstruction of underwater environments in 3 dimensions can be of great utility for scientific or industrials applications, being the use of Autonomous Underwater Vehicles (AUVs) equipped with cameras an invaluable tool with progressive improvements. However, a highly accurate vehicle localization process is fundamental to place every portion of that 3D model in its real position with respect to the origin of the world system of coordinates, and to join properly the overall reconstructed area, especially in large surveys.